Sergey Karjakin advanced into the semi-final. 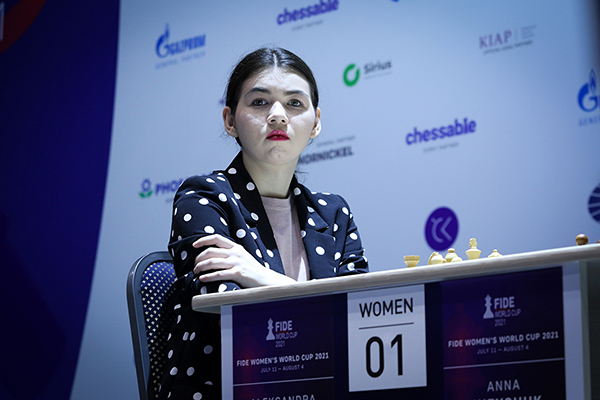 July 30, in Krasnaya Polyana, there took place a tie-break of the quarterfinal match between Sergey Karjakin (Russia) and Sam Shankland (USA), as well as return games of the women's World Cup semi-final.

Playing white in the first 25-minute game, Sam Shankland got a slight edge in the Catalan opening and maintained tension. Sergey Karjakin tried to open up the position and get counter play; however, he committed several inaccuracies and Black's position became very unpleasant. With a nice tactical blow on move 39 White won a pawn and confidently converted his material advantage.

Shankland employed his favorite Najdorf variation in the return game, which Karjakin met with the poisonous 6.h3. This opening choice seemed like an unpleasant surprise for the American GM: he trained his guns recklessly aimed on the opponent's queenside and took the a2-pawn, but a few moves later his bishop was trapped. Sergey won this bishop for two pawns and pressed his edge home with precise moves.

The score was equal again, and the opponents needed to play two more 10+10 games. Sergey Karjakin scored a confident victory as White, and in the return game the Russian first defended a tough position and then equalized. The American GM continued to look for winning opportunities, but it led to his losing two pawns and resigning.

July 31 is a rest day at the World Cup. The tournament resumes August 1.

In the women's tournament, the game of two ex-world champions, Alexandra Kosteniuk (Russia) and Tan Zhongyi (China) saw a rather rare line of the Petroff Defense. First, White achieved a space advantage in the center, and Black’s grabbing space on the kingside only weakened his position. Then Alexandra methodically swayed her opponent's defenses, and Zhongyi did not defend in the best way and could find herself in an absolutely hopeless position around move 25 (in the main line the black queen could have been trapped). Kosteniuk did not go for the most principled line and had to sacrifice the exchange to maintain the initiative. However, the Chinese player soon blundered to sustain heavy material losses and resign on move 38.

Aleksandra Goryachkina (Russia) and Anna Muzychuk (Ukraine) sorted things out in one of the Gruenfeld Defense lines. On move 18, Black made a seemingly insignificant but serious error, after which she could have remained down a piece. However, Goryachkina opted for a more practical, "human" continuation. The battle continued with equal material, but White maintained a certain pressure with more active pieces on the one hand and Black's compromised pawn structure on the other. The Russian was confident in the rook ending, gradually outplayed her opponent and won on move 43.

The Russian players Aleksandra Goryachkina and Alexandra Kosteniuk will play in the final. Tan Zhongyi (China) and Anna Muzychuk (Ukraine) will contest for third place.