Magnus Carlsen and Sam Shankland have taken the first lead. 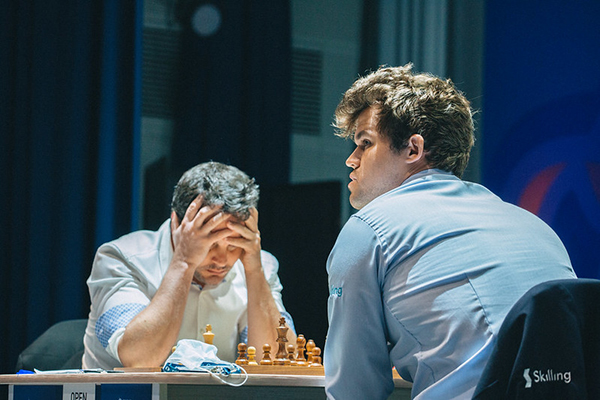 The FIDE World Cup Quarterfinals kicked off in Sochi on July 28.

Etienne Bacrot (France) and Magnus Carlsen (Norway) played out one of the classic systems of Ruy Lopez. Black solved his opening problems rather easily by sacrificing the e5-pawn in the spirit of the Marshall system. After White lashed out in the middlegame, his king became exposed, and the Norwegian bishops and queen rushed into the attack. The world champion seemed close to victory when he obviously missed French grandmaster’s nice defensive resource. There arose a sharp position of dynamic equilibrium in which the white queen faced a rook, a bishop and two pawns. However, the Frenchman committed several inaccuracies in time trouble, and Black again achieved a decisive advantage. Etienne Bacrot recognized his defeat on move 45.

Sam Shankland (USA) vs. Sergey Karjakin (Russia) was a calm line of the English opening with the queens off the board by move 13. White achieved a spatial advantage in a maneuvering struggle, but Black's position remained quite solid. Black advanced his pawn recklessly in time trouble, which allowed White to grab even more space and organize a breakthrough on the queenside and in the center soon after. Karjakin defended stubbornly in a difficult situation, but the American grandmaster was precise and forced transition into a winning pawn ending. The Russian player recognized his defeat on move 58.

Santosh Vidit (India) and Jan-Krzysztof Duda (Poland) played out the Catalan opening, fighting hard to dominate the only open c-file. A series of exchanges simplified the position greatly, its evaluation never deviating from approximate equality. A draw was agreed on move 33.

Amin Tabatabaei (Iran) and Vladimir Fedoseev (Russia) opted for the Carlsbad variation of the Queen's Gambit. Both opponents castled long, upon which White and Black launched a queenside and kingside offensives, respectively. The situation escalated, and Black offered a pawn sacrifice, hoping to gain control over the light squares in return. The Iranian GM rejected the sacrifice and, having carried out a central pawn break, offered a draw, which was accepted.

The return games are scheduled on July 29. The same day will resume the Women's World Cup after a rest day.