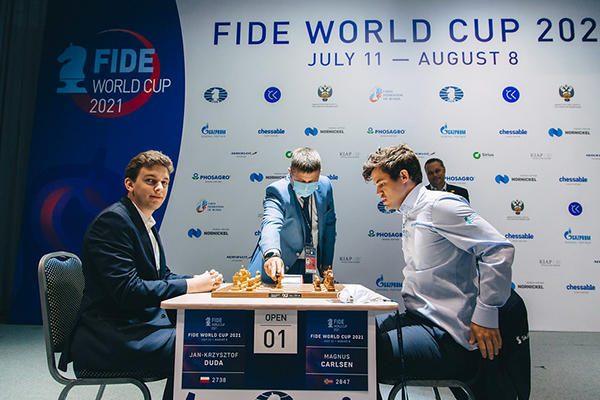 The symbolic first move in the semifinal game one between Jan-Krzysztof Duda (Poland) and Magnus Carlsen (Norway) was made by the Deputy Governor of the Krasnodar Krai Alexander Vlasov.

The Polish GM was White in game one. The game was rich in double-edged struggle, but ended in a draw. In game two, the world champion handled the opening rather passively as White: Duda got a comfortable play and an edge. In the endgame, the Polish grandmaster first missed the strongest continuation by offering the trade of rooks, and Carlsen was close to escaping. However, the Norwegian made an error and lost in a strong time pressure.

Playing black in game one of the Women's Tournament, Tan Zhongyi (China) outplayed Anna Muzychuk (Ukraine). White put oil in the fire by sacrificing a pawn for the kingside attack, but got no compensation for the missing material. The Chinese player, in her turn, organized an offensive against the opponent's king that had castled long and gradually converted her advantage.

Finding herself in a must-win situation as Black in the return game, Muzychuk went all-in with the Albin Countergambit in its ultra-modern interpretation. Nevertheless, it did not take the ex-world champion by surprise:  Tan got a substantial edge rather quickly and delivered a beautiful blow on move twelve that destroyed Black's defenses. As a result, the Chinese forced a draw in the winning position and won the match 2.5:1.5 to become the bronze medalist of the Women's World Cup.