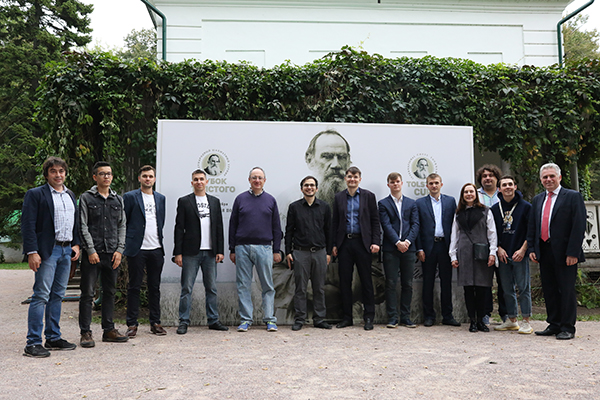 Going into the Tolstoy Cup, the tournament participants enjoyed an entertaining trip around the Yasnaya Polyana estate museum with a visit to the great Russian writer's house. The drawing of lots took place in the hall of this house.

Using Leo Tolstoy's original Staunton chess set, GMs Nikita Vitiugov and Maxim Matlakov reproduced the game between L. Tolstoy and E. Maude, played in Yasnaya Polyana on October 17, 1906. Ten chessboard squares were "encrypted" with the numbers ranging from 1 to 10. When a piece hit the "encrypted" square, the game stopped, and the museum director, Ekaterina Tolstaya, called out one of grandmasters’ names to assign a corresponding start number.

Pairings for all rounds

All the young chess players got gifts from the organisers. Prizes to the medalists were awarded by the Tolstoy Cup participants – Dmitry Andreikin, Evgeny Tomashevsky, and Nikita Vitiugov.

The children could take autographs and pictures with eminent grandmasters both before and after the ceremony.

The Tolstoy Cup is to run at the Yasnaya Polyana’s cultural centre on September 11–12. This is a 9-round Swiss rapid chess event with the time control being 15 minutes until the end of the game plus a 10-second increment per move. The first five rounds are taking place on September 11, the final four — on September the 12th. Games start at 15:00 (Moscow time).