The last two rounds were real battles for the pedestal. In the women's section, as many as five players were contesting the prizes with two rounds to go. Leading the field with one point, Olga Girya was pursued by Valentina Gunina, Alexandra Goryachkina, Alina Kashlinskaya, and Natalija Pogonina. However, the penultimate round has significantly reduced this number. 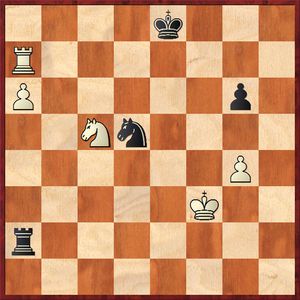 Taking the last step into the abyss. 54...Nb4 should have been played instead. This is a two-mover for White from now on.

Alina Kashlinskaya went down to the tournament’s revelation Margarita Potapova and thus fell out of the race for the bronze. Alina came up with an unexpected decision to follow in the footsteps of Daria Charochkina and opened with Trompowsky, which she had also employed against Alexandra Kosteniuk in the last year's Superfinal. 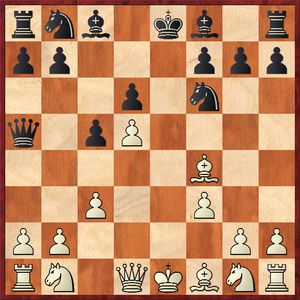 Potapova resorts to a rather popular and principled line. White should stop any nonsense against the d5-pawn by the immediate 9.Qd2!? and 10.с4, with an eye to a more pleasant endgame.

The opponent's failures paved the way for Aleksandra Goryachkina to finish third. Playing the world title runner-up, Charochkina opted for 1.b3, and not for Trompowsky. There was a moment in the game when Charochkina was up three pawns. Then she would not create the connected passers, and then... 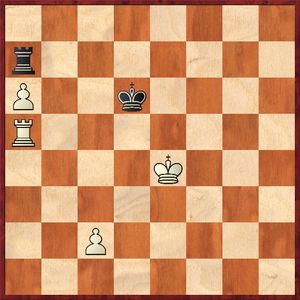 Since his famous game against Levon Aronian, we have been aware of Kramnik’s winning method 70.c4! Kc6 71.c5, and Black is in zugzwang.

For some reason, everyone was relishing this particular position and the stalemate idea, whereas, in fact, White erred with his previous move. Correct is 73.Rc5+.

Alexandra responded to this gift of fate with yet another technical display, outplaying Shuvalova as White. 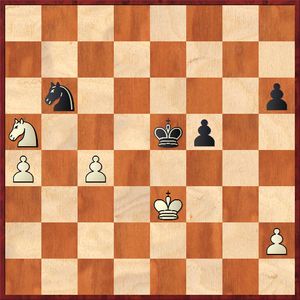 With very few material on the board, it is high time the endgame magic began!

Comparing with the above line, White is up a bunch of tempi, and the knight is known to be a poor fighter against the rook pawn. 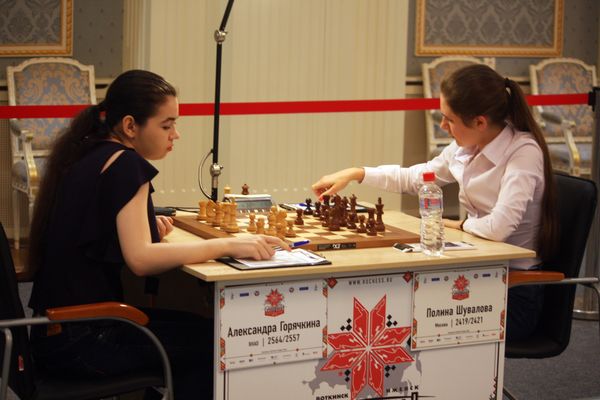 In the last round, Olga Girya decided against pushing her luck and made a quick draw with Margarita Potapova. Being an honest girl, Girya immediately told your correspondent: “It was not a prearranged game... The threefold repetition just happened by itself!” Nevertheless, neither side seemed upset, and while Natasha Pogonina was still doing her best to catch up with the competitor, Girya headed for the hotel to get ready for a potential tie-break.

In order to face Girya in a tie-break, Pogonina needed to outplay Zarina Shafigullina first. Despite the history of previous failures, Shafigullina was eager to give her opponent a battle, and the position was level for the most part of the game. 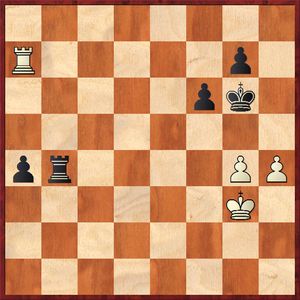 After 47.g6+ Kh6 Black is grabbing both White’s pawns, and a passive stance fails to a well-known mechanism of pushing one pawn to а2, and her fellow to f2, followed by Rh1-h2, and the white rook drops. 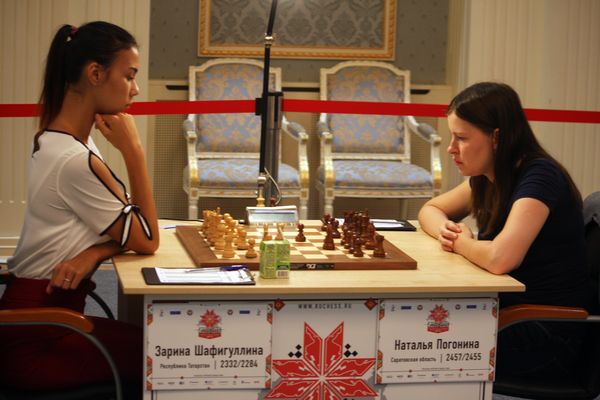 Olga Girya and Natalija Pogonina were to face each other in the Superfinal tiebreak for the second time in a row. As for Natalya Pogonina, it was her fourth tie-break for the Russian champion's title at that (before Girya, she had battled it out against Galliamova and Goryachkina)! If in the previous year's edition, the current national champion practically deprived her opponent of any chances, now Girya arrived with all guns blazing, which became clear as soon as game one.

Your author is currently writing a book on g2-g4 moves in the closed positions, and this Girya – Pogonina game will complete this work. With the lines to be opened up against her king, Black's situation is very unpleasant indeed. Pogonina's defense was ingenious, but she ended up blundering in time pressure when Girya’s heavy pieces were giving a hard time to her king. 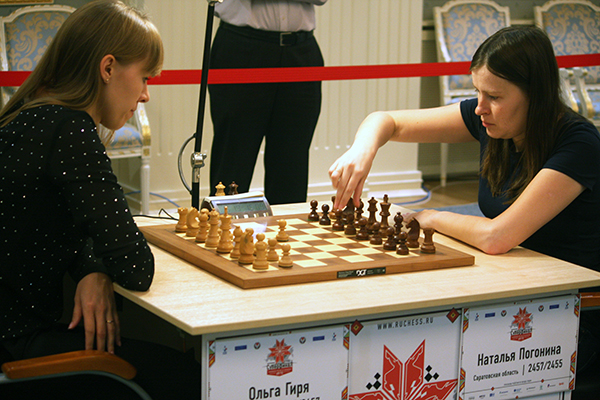 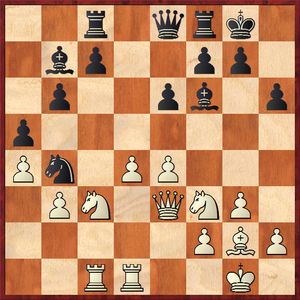 «21…c5 was the way to go, but Girya opted for a modest Qe8-d8-e8-d8, giving time to her opponent to rearrange pieces and deliver a crushing central blow.

No words can do justice to what was happening in the Armageddon game. It was a blitz game with a champion title and a 1.5 mln. car at stake. Nerves were strained to the limit, and Pogonina was playing faster so that Girya’s minute surplus quickly evaporated. Let me remind you that the Armageddon has 5 minutes for White against 4 minutes for Black, and a draw favors the latter. 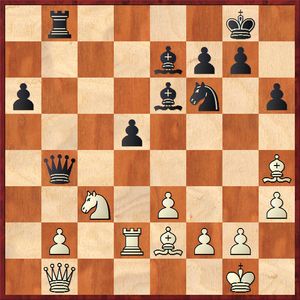 White had a minute and fifty seconds, and Black two and a half minutes; meanwhile, good advice is beyond price for White in this position. Both minors are hanging, and after 26.Bxf6 Bxf6 27.Qd3 a5 only Black can win. There followed, however

27.Qc1 g6? 28.Bxa6 Rb6 29.Bf1 – and Girya started producing strong moves at a rapid-fire pace, which came as an unpleasant surprise for Black. Soon after Girya appropriated the d5-pawn and made it confidently to move 60 that is a starting-point for the time increment. Pogonina dropped her knight in a lost position.

The way things stand now, Girya, Goryachkina, Pogonina, and Kosteniuk are all with prize cars. Time for Kashlinskaya and Gunina to give it a serious thought as well. 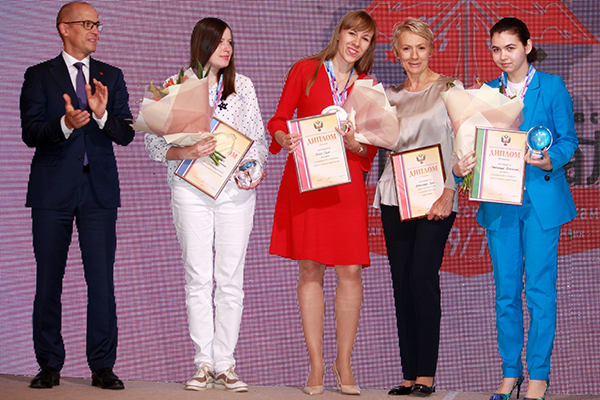 Meanwhile, looming ahead in the men's tournament with one round to go was a many-player round-robin as in the penultimate round Vladislav Artemiev defeated Ernesto Inarkiev, Evgeny Tomashevsky and Nikita Vitiugov were maintaining their lead, and as many as four athletes were only half a point behind.

The last round turned out to be incredibly productive, and even draws resulted from hard-fought battles. 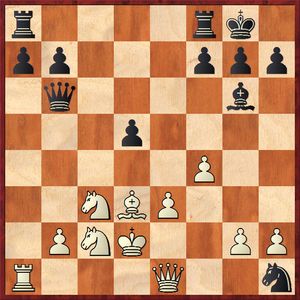 The engine shows prophylactic thinking leading to domination and claiming that White is for choice after 21.f5! Bh5 22.Kc1!. The text falls victim to a crushing central blow.

It was still acceptable to go for 23.f5 Qxb2 24.Ra3, and the text gives Black a dangerous attack.

After 29.Kd2 Rfc8 30.Rxb5 Qxc3+ 31.Qxc3 Rxc3 32.Ne3 White would have remained down an exchange for the pawn, whereas the text allows Inarkiev to deliver a deadly blow. 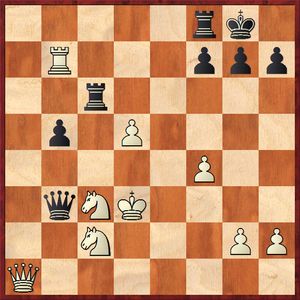 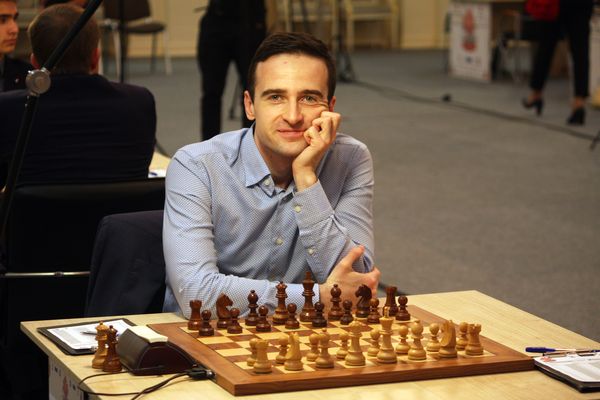 Inarkiev clinched into the share of first, same as Maxim Matlakov. 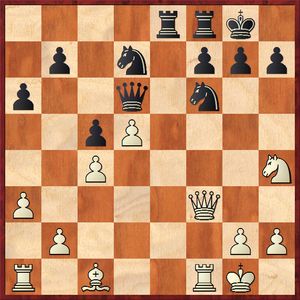 This is definitely a blunder; Black should have bothered the bishop with 19...Nh5!

Nikita Vitiugov had to come up with some precise play against Alexey Sarana to make a draw, and now everything was in the hands of Evgeny Tomashevsky, who was putting a lot of pressure on Kirill Alekseenko’s position. Tomashevsky has outplayed his younger opponent, but Alekseenko’s tenacious defense afforded him a chance to bail out. 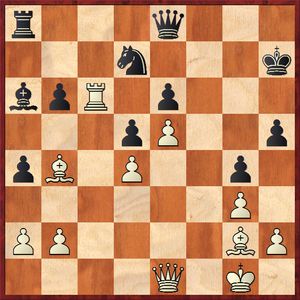 33.Qe3 was the way to go as the black bishop is unable to help his king out; however, you instinctively want to force your opponent with checks.

The time control move marked the game's transposition into the rook ending, in which Black’s king activity gave him some hopes of saving the game. At this moment, the quadruple tie-break started looming large in front of the team of arbiters, but Tomashevsky’s technical performance landed him victorious. 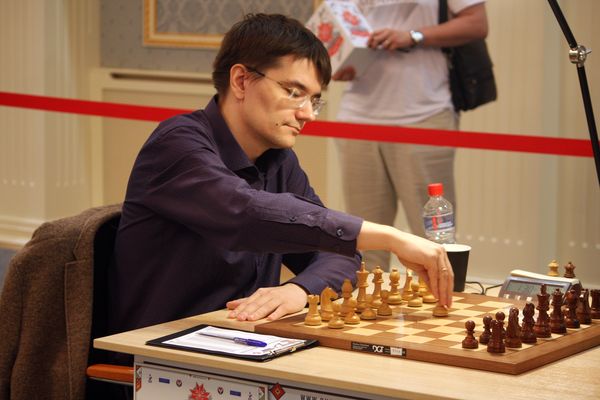 When it came to the share of 2-4 places, Inarkiev was edged out by his inferior tie-breakers in favor of chess players from St. Petersburg. Vitiugov took the silver, and Matlakov the bronze. 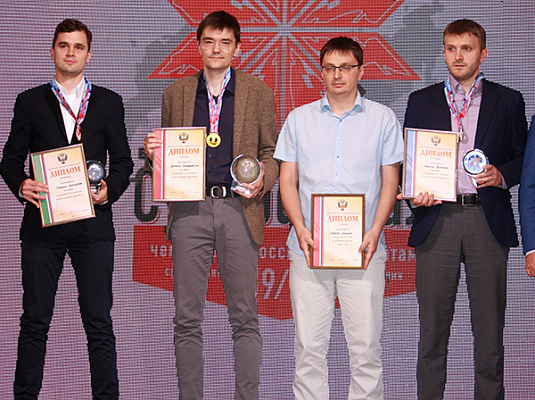 
The closing ceremony was spectacular. Music was being played, kind words were being said, and shining on the scene were Buranovskiye Babushki. There were many praising the excellent organization of the Superfinals in Izhevsk. It is hard not to agree with this point of view. 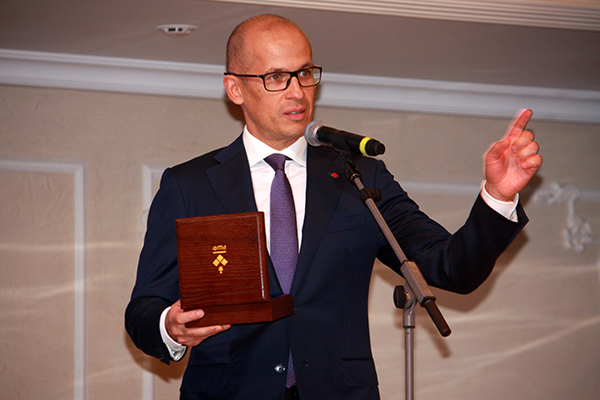 Delivering a speech is the Head of Udmurtia Alexander Brechalov 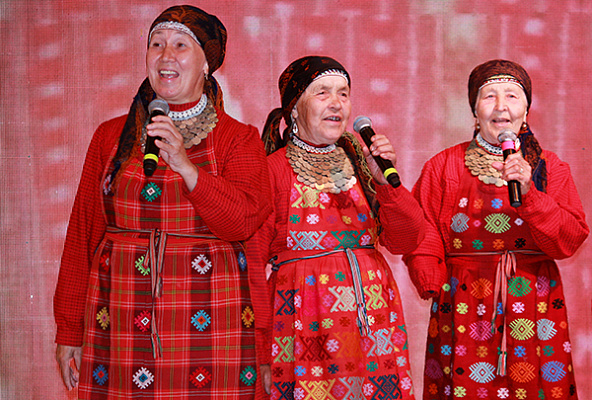