The jubilee edition of Belaya Ladya is in full swing in Dagomys. The Congress of Russian chess players is over; underway are various seminars, master classes, entertainment programs, and lectures with grandmasters, while a massive blitz tournament has just come to an end. FIDE President Arkady Dvorkovich is a guest of the event.

The main section broadcasts the games of leading teams online; with the finish still far away and no clear leaders so far, the audience’s attention is mainly focused on the Russia – India friendly match. The most titled players' matchup has brought together stellar lineups, many-time world champions Gukesh (the youngest grandmaster rated around 2550), Mendonca (boys), Rakshita, Savitha (girls) declared in the starting list.

The founding fathers of chess’s ancestors are rated a hundred points above their opponents at almost every board, but for the time being the Russian players are giving their guests a harsh treatment - 6.5:1.5 in favor of the Russian team. Representing the home team are Volodar Murzin, Andrey Tsvetkov, Viktoria Kirchei, and Alisa Nur-Mukhametova. It should be noted that the young Russians enjoy strong support of their coaches Mikhail Kobalia and Sergei Rublevsky. In the first encounter, the guests had white color on board one, but the Russian team ended up scoring a narrow victory. However, the next matchup was already 4:0! 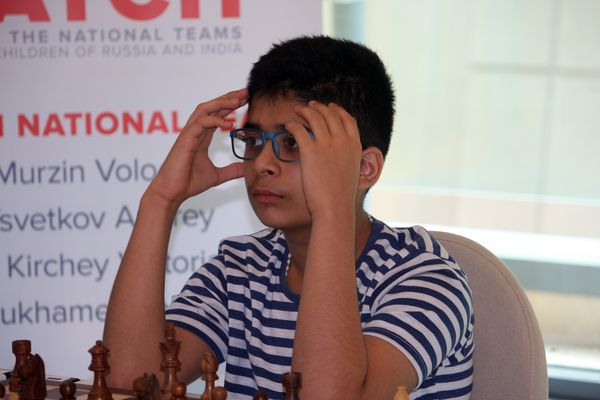 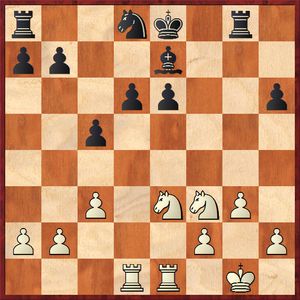 Black has given a dubious treatment of the opening, but how to go about exploiting their weakened pawns? Volodar’s performance is reminiscent of Mikhail Ivanovich Chigorin’s from the famous game with Lasker!

To immediately defend the most vulnerable pawn via 22...Ke8 23.Nd3 Kf7 would be a tougher approach, but the Indian athlete seems to have underestimated the arrival of the second knight.

Bringing all pieces into play! Now that both rooks and knights are pressing Black's weaknesses, there is no escaping material losses.

Trading the knight has eliminated the last defender of the e6-pawn, which Murzin goes on to exploit skillfully.

Also bad is 32...dxe5 33.Nxe5; having appropriated a pawn should be enough to give White an easy victory. 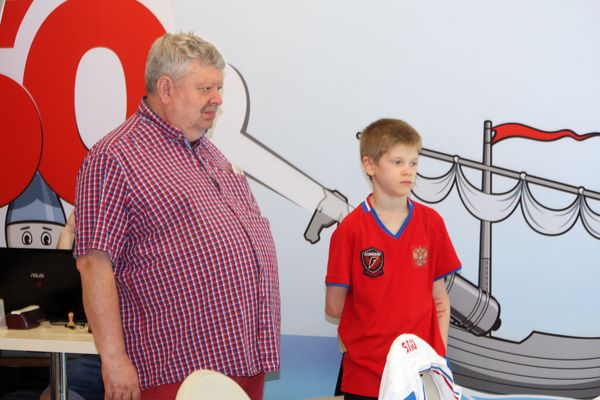 Even if Murzin’s success over India’s number two (playing Black in round one, Murzin drew Gukesh) was not out of the question, a dominant performance of Andrey Tsvetkov of Moscow over the PR-inflated chess genius delivered a mighty blow to the guest team. 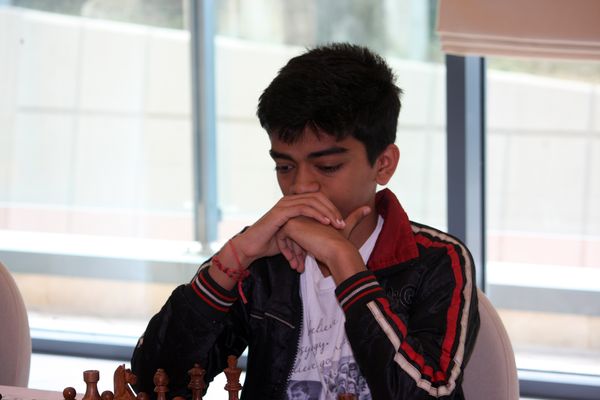 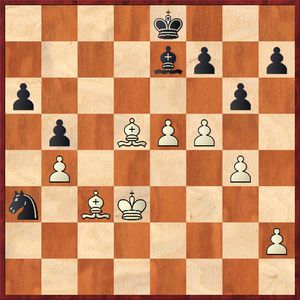 A few moves earlier, Black incorrectly claimed a draw by the threefold repetition, and when the play resumed, Andrey would not give his opponent a single opportunity to escape.

Black has to give up a pawn, and now transposition into a pawn ending is a decider. 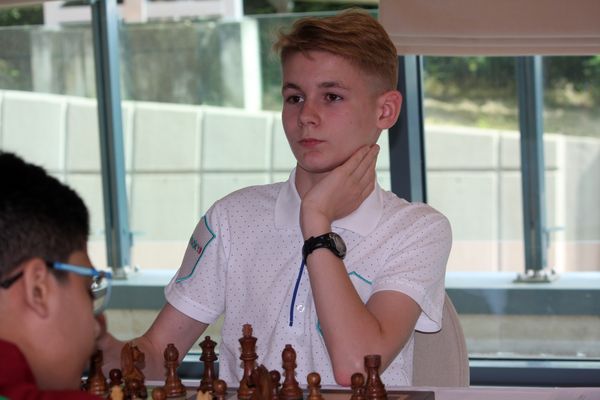 
I wish a cameraman were there in the playing hall! Emil Sutovsky posted in Facebook that the footage with young Indian talents had scored a record high on YouTube: it would also be nice to let the viewers know that it is not as bad as that for our country in terms of young gifted athletes.

The Indians were perhaps hoping to bounce back at the girls' boards, but these expectations met with equal success. 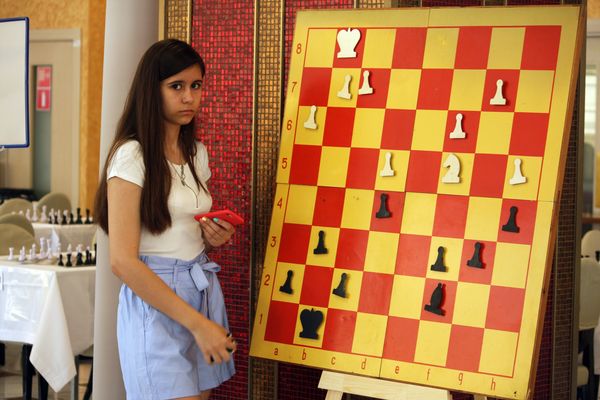 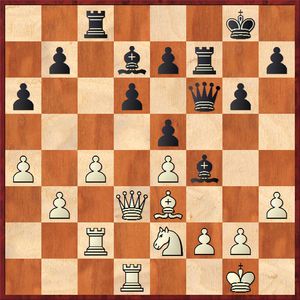 It may seem unclear at first since Black is ready with her kingside counterplay, but Viktoria Kirchei gripped the dark squares and converted her edge with a steady hand.

The pawn is doomed, and Kirchei was adamant in converting it. 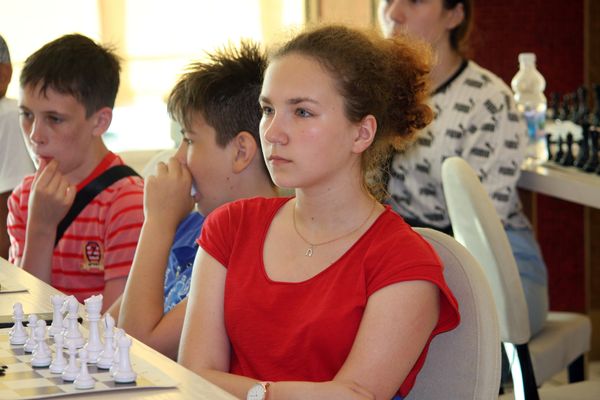 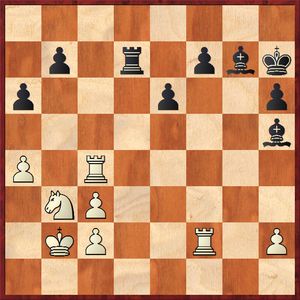 Only on board four the Indian athletes should not have gone down, but looking at what was going on in other games Rakshita got nervous and committed a decisive blunder.

Black's chief trump and basis for compensation for the missing exchange is a passed pawn. Black should have pushed it with 48...e5 with a complicated game. Black lashes out, which results in irreparable damage.

The root pawn is gone, and White is about to create hers.

Taking the last step into the abyss. 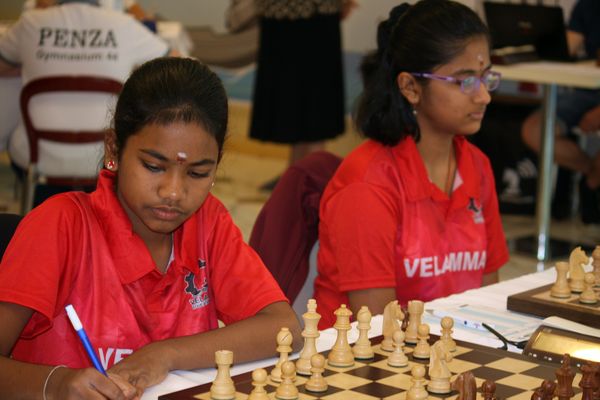 The Indian girls are in the role of pursuers so far

The course of the match goes to show that the contradictory statement “everything is bad in Russia and vice-versa in India about the children's chess” is far from true. It is clear that the guests are not going to give up, and it is right now that they need to come up with their best athletic qualities. The festive chess show in Dagomys is going on!