It is an important step in preparation for the 44th World Chess Olympiad. 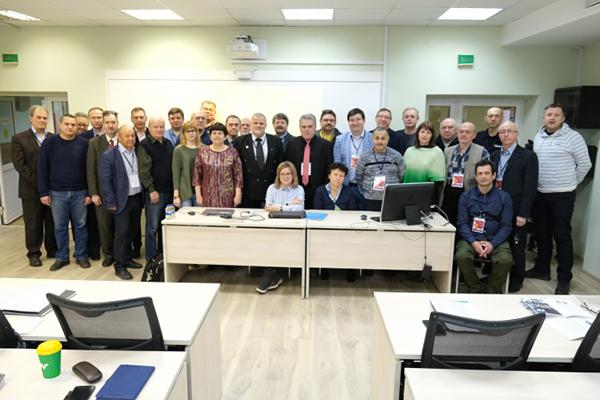 The number and geography of participants grow with every successive Training Seminar. The Moscow event featured 35 International Arbiters who represented five national federations: Russia, Azerbaijan, Bosnia and Herzegovina, Kazakhstan, and Ukraine. Despite different origins, citizenships and ages, the attendees shared a common language and were brought up in the cherished traditions of the renowned Soviet school of chess arbitering that was established by such luminaries as Lev Abramov, Vladimir Dvorkovich, and Yuri Averbakh. This shared background allowed them to work out common interpretations of the finer points in the Laws of Chess and to agree on the best processes and practices to be used in the upcoming competitions.

The Pilot Project’s objective is to train and to certify a cadre of IAs, especially female arbiters, who are on top of all recent changes in the Laws of Chess and the FIDE Competition Rules, plus are able to communicate in English efficiently and to be integrated into multinational arbiter teams at the top-level FIDE events, culminating in the Chess Olympiads 2020 and 2022. The specific task is to build an expanded list of arbiters who will serve in various capacities at the 44th World Chess Olympiad in Moscow and the 1st World Chess Paralympiad in Khanty-Mansiysk.

The unique innovative approach by the Chess Federation of Russia offered the leading International Arbiters of the partner countries both an intensive refreshment course on the most difficult areas of high-level arbitering and a chance to practice and to apply new skills during the 2020 Moscow Open, the largest chess festival in this country, where many of the workshop attendees are serving in senior roles.

The Principal Lecturer, IA/IO/FL Alexander Tkachev (Russia), the CFR Technical Director, generalized the lessons learned from previous Pilot Project events in Moscow, Tashkent, Baku and Sochi, as well as shared first-hand experience of the challenging situations that occurred during the recently completed World Rapid & Blitz Championships in Moscow and the World Women’s Championship Match in Vladivostok. In his responses to multiple questions from the audience, Mr. Tkachev described in detail the criteria that arbiters shall meet in order to be nominated for the World Chess Olympiad in Moscow and the 1st Chess Paralympiad in Khanty-Mansiysk.

The Guest Lecturer, IA/IO Vadim Tsypin (Canada) presented a refresher on the FIDE Competition (Tournament) Rules for team competitions and led a group discussion that focused on the officials’ interactions with team captains. The workshop attendees used this topic as a springboard to share their opinions on a wide range of chess life issues. Mr. Tsypin directed participants through problem-solving sessions that had them practice using English in real-life chess game situations that sharpened the attendees’ analysis and communication skills.

IA/IO Vladimir Makhnev shared his experience of leading an anti-cheating team during the 2019 WRBC. A lively discussion on the priority of the host nation’s laws followed.

For the second time in the pilot project, an examination test featured an equal number of questions in Russian and English, including several open-ended questions. A post mortem discussion allowed participants to see their marked tests, to review difficult questions with the Lecturers, and to provide feedback on the Workshop. Several IAs asked to extend such events to at least one more working day and to expand them faster to other countries with experienced Russian-speaking arbiters who would be an asset to the 2020 Olympiad.