New games will be played on July 25. 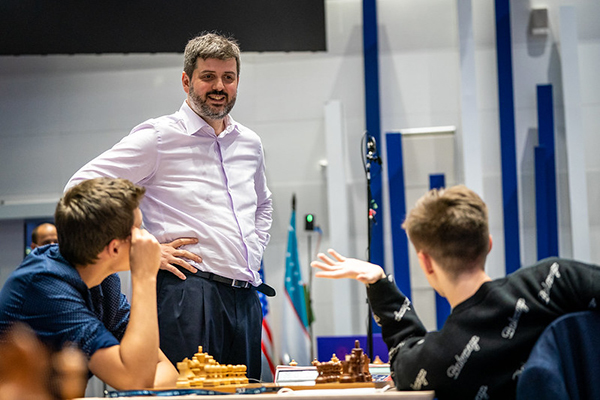 July 24, round four tie-breaks of the FIDE World Cup and the FIDE Women’s Cup (Finals 16 and 8, respectively) finished in Sochi.

Magnus Carlsen, “The classical games were very tough. In game two, I thought I was better or even winning, but he managed to complicate the game. And then I missed a crucial detail and was very happy to escape with a draw. I was a bit nervous at the tie-breaker, but, fortunately, I managed to hold easily as Black in the first game. He went wrong pretty early in the second game, and I won comfortably.

Peter Svidler, "I need to talk to Magnus Carlsen to figure out and thank the person who told him to play this line yesterday. I noticed Magnus go for this line, and I spent like 10 minutes checking why Black cannot take on e4. And Black cannot take it (laughing). As a result, this semi-bluff worked quite well. I do not know if I was even better, but I got a playable position for White, which is not often the case as of lately”.

In one of the three Russian derbies, Sergey Karjakin lost the first game to Vladislav Artemiev, then bounced back on order and went on to take the 10+10 games.

In another Russian derby, Andrey Esipenko and Daniil Dubov started with draws, upon which Esipenko won the first 10+10 game and stood his ground in the next one as Black.

Kateryna Lagno: “It was a really tough match. But I have impression that I was pushing all the time. When it came to rapid, I was pressing from the first game, but could win it easily. I just could not find a plan when my opponent built sort of fortress. But when I already finished the game, my husband immediately told me how to break it. However, I did not have time in the game and thought it was already a draw. It was a really tricky and tough game”.

Nana Dzagnidze (Georgia) defeated Polina Shuvalova (Russia) in the rapid section: the opponents traded blows first, but the more experienced Georgian player scored in the first ten-minute encounter and managed to draw as Black in the second one.

Dinara Saduakassova (Kazakhstan) and Alina Kashlinskaya (Russia) exchanged blows in rapid, upon which the Kazakh player took both 10 + 10 games.