Sergey Karjakin Wins Cup of the Group of Companies "Region" 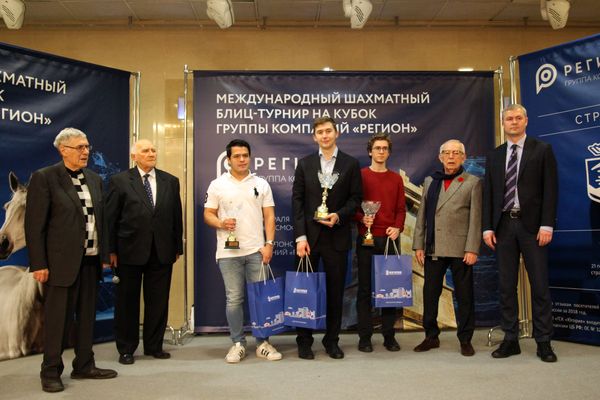 The traditional international blitz Cup of the Group of Companies "Region", one of the most popular speed chess events in the world, took place in the Cosmos Hotel in Moscow on February 28. The prize fund of the event was EUR 20,000. The participants played 9 double rounds according to the Swiss system.

World vice-champion 2016 Sergey Karjakin confidently covered the whole distance of the tournament: he didn't lose a single game and eventually scored 14.5 points out of 18 to take the first place. Silver medalist David Anton Guijarro (Spain) is half a point behind Karjakin. Eduardo Iturrizaga Bonelli (Venezuela), Rauf Mamedov (Azerbaijan), Alexander Grischuk (Russia), and Aleksandar Indjic (Serbia) got 13 points each. Iturrizaga Bonelli took the third place thanks to his superior tie-break.

The prize-winners were rewarded by Advisor of the Group of Companies "Region" Yuri Korotkov, Deputy Director General of the Yugoria State Insurance Company Vitaly Naumenko, and Tournament Director Alexander Bakh.