Novelties Help Those Who Help Themselves

Two games of the starting rounds clearly stand out by richness of their content and similarity of their plots: one of the players comes up with a powerful novelty, but his unprepared opponent finds the best reaction and eventually wins after a lengthy fight. 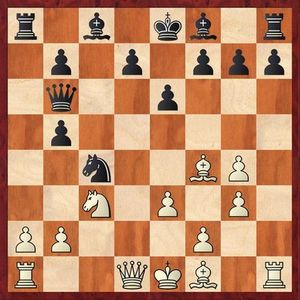 13.b3 Bb4! It is easy to see that Black can regain a piece, but Ian needed to read a lot deeper in order to make this decision while knowing that his opponent had studied the position at home. 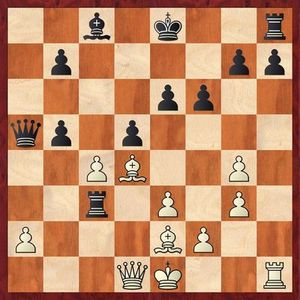 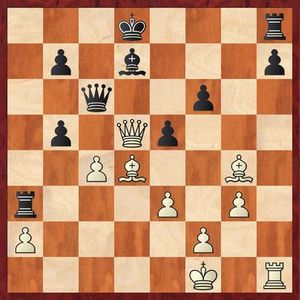 19...b4! Ian finds the best way to return an exchange – his rook will be replaced with a dangerous passed pawn.

24.Qd3. 24.Rh4 deserves attention, activating the rook as soon as possible. White would get a safer version of the actual game. 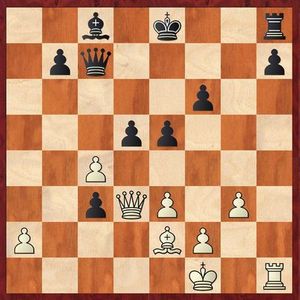 24...b5! A brilliant thrust! Black brings another b-pawn to the c-file, which is very beneficial for his army. 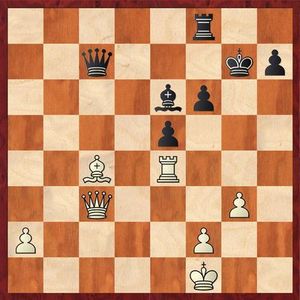 White can only dream about a comfortable game. Getting rid of the pin is not easy. 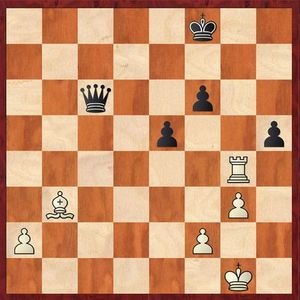 36.Rg8+? This is a mistake, and Ian showed great technique utilizing it. White could build a fortress by 36.Rh4 followed by transferring the bishop via c4 to f1. 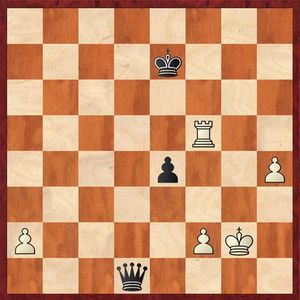 46.Rg5. Starting from the move 24, White is always a little short. On 46.Re5+ Kf6 47.Rxe4 Black replies 47...Qd5 48.f3 Qxa2+, reaching a baseline textbook position, where Black wins by coming with his queen from behind and gradually pushing the white king upwards. White's defensive setup loses harmony, and he loses a pawn. Having one more pawn does not change anything apart from making Black's task more time consuming.

In addition, White must not allow е4-е3 with the same idea of unsettling the f2-pawn. Therefore Anish transfers his rook on the third rank. 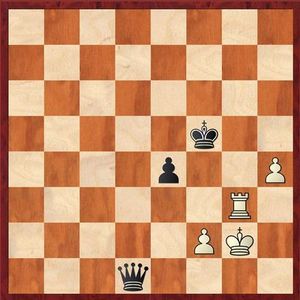 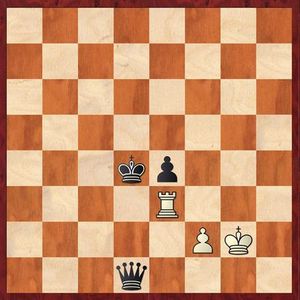 Caruana followed Giri's example by preparing a novelty in an opening outside his normal repertoire. 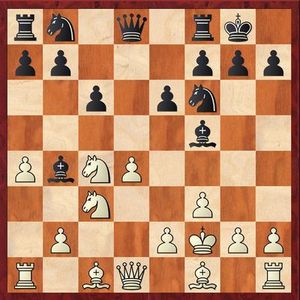 13.e4. If White manages to mobilize his forces, the powerful pawn center will secure him a large advantage. 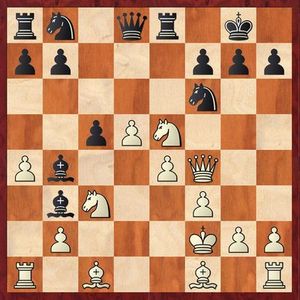 14...c4! Caruana's outstanding idea combines concrete variations with positional maneuvers. Well, it makes Ding Liren's achievement even more formidable, as he managed to realize the dangers White is about to encounter. 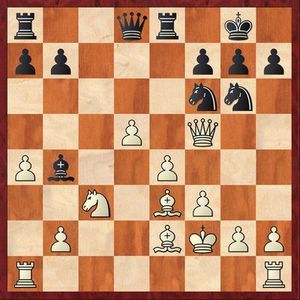 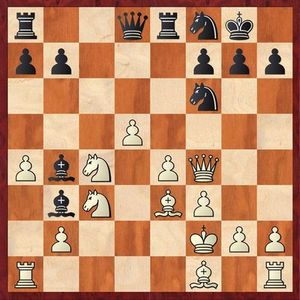 18.Qf5. I was unable to make my engine refute 18.Qc1!? After 18...Rc8 19.Nd2 it begins sacrificing on e4 and d5, but does not consider these sacrifices convincing. Possibly this is the one and only inaccuracy made by the Chinese grandmaster in the entire game.

18...Bxc4. 18...Rc8 deserves attention. After 19.Ne3 Bc5 Black obtains a good game on dark squares thanks to his lead in development. 19.Nd2 is met by 19...Ne7, utilizing the idea 20.Bxf6?? Qb6+. White can, however, solve his queen problems radically by sacrificing it for a rook and a bishop: 20.Qxc8! Nxc8 21.Nxb3, and the position finally stabilizes, although it remains very complex. 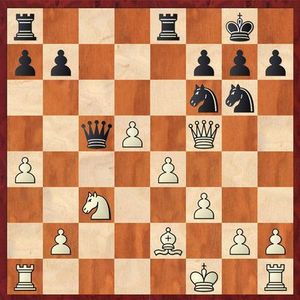 24.Rd2 Qe3 25.Rc2 a6 26.Qh3. The queen follows the rook in the same unhurried manner. Surprisingly, Black has no way of creating any serious threats, thanks to White's strong pawn shield and generally closed position.

It should be noted that Caruana won opening duels in three other games. However, only one of those game brought him fruit. 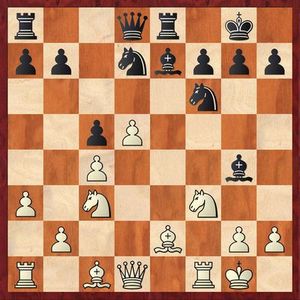 Previously Black would always place a bishop on d6, preventing the d-pawn advance. Caruana played 13.d6 very confidently, showing how well he is prepared in the scheme that is new for him. 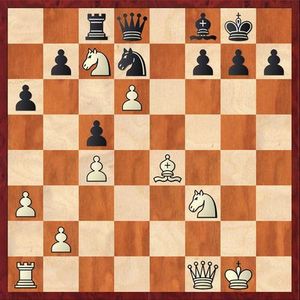 As for Ding Liren, the impressive victory against Caruana became even more valuable because the Chinese had lost the first two games, both times let down by his f-pawn. 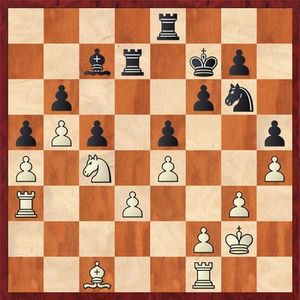 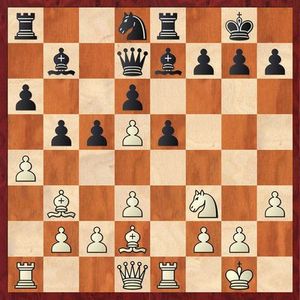 15...f5? Don't judge my vocabulary too harshly, but this thematic advance also requires thorough preparation – by, say, 15...f6 (it is useful to overprotect the е5-square).

Ding Liren preferred 18...Nf7 19.cxb5, lost a pawn, then tried to create some kingside play, but it only made matters worse for him.

Only in the fourth round we saw all games ending peacefully. Nevertheless, there was nothing peaceful about the fighting spirit of the players. Caruana and Vachier-Lagrave had clear scoring chances against Nepomniachtchi and Grischuk respectively. Below is a fragment of the latter game. To be fair, Alexander also missed a number of promising opportunities in three first games. 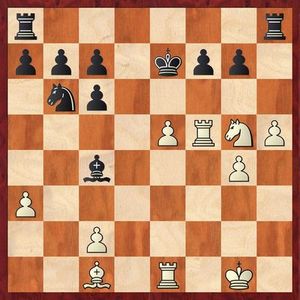 Ten moves ago White sacrificed a pawn for the pressure on f7 and continued in a very determined manner. Now he makes an excellent move, expanding the front of his attack.

29...Nxa4. Capturing the pawn could cost Black the game. In order to prove it, we will have to explore a number of brilliant and difficult variations.

Grischuk was under the time pressure, Vachier-Lagrave had enough time, and both of them underrated how strong 30.Re4! is. 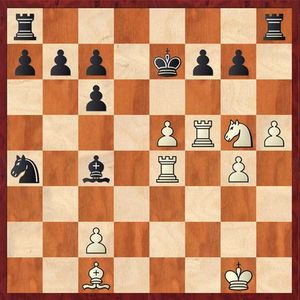 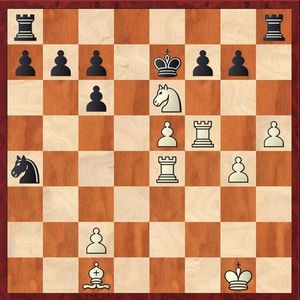 The most curious variation occurs after 31...Nc3 32.Ng5 Nxe4. On 33.Nxe4 b6 the engines happily show that Black is at least not worse. However, if White goes for 33.Rxf7+! Ke8 34.Rxg7 instead, his domination on the 7th rank should yield him a victory.