A student of Tbilisi’s coach Vakhtang Karseladze, Nona Gaprindashvili became the female champion of Georgia at 15 when she scored 15.5 points out of 16. Six years later, Nona became the strongest female chess player on the planet and the 5th women's world champion after thrashing Elisaveta Bykova 9:2. Gaprindhasvili carried this title for 16 years, only losing it to Maia Chiburdanidze by a score of 6.5:8.5 in 1978.

Gaprindashvili made an enormous contribution to promoting female chess. Her outstanding success discarded the disregard for the chess abilities of the “weaker sex”. Nona became the first international grandmaster among women. She was also the first woman to receive the title of international grandmaster among men in 1978. If we add the fact that Gaprindashvili became the first Oscar female chess laureate, one can see the extent of Nona’s contribution to the chess world.

She won the Soviet championship five times and she took ten Olympic golds with the Soviet team, as well as winning the largest women’s tournaments in Beverwijk, Belgrade, Barcelona, Kiev and Wijk aan Zee. Nona also performed successfully at men’s tournaments. Alongside her other accomplishments, she won the open US championship in Lone Pine, tournaments in Reggio Emilia and Wijk aan Zee and she won prize medals in Hastings, Luanda and elsewhere.

A remarkable chess player, she defended her title of world champion four times, beating Alla Kushnir three times and Nana Alexandria once. After losing her crown, Gaprindashvili continued to perform at a high level, demonstrating her trademark aggressive style and far-reaching strategic and tactical combinations.

At the moment, Nona continues to play in seniors’ competitions, often with great success. 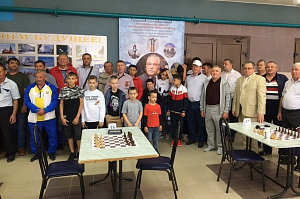